Our cinnamon spice mixture consists of premium Korintje cinnamon. Sweet and mellow, Koritnje is the type we all remember from our childhood. Fragrant and smooth, it is the closest to that sold in deli’s but more fresh and of the highest quality from Indonesia.

the Best CINNAMON money can buy 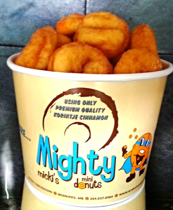 the Best mini donuts in town

We import our donut mix from a blending company in the U.S. It is the only mini donut mix compounded to produce the best mini donut, expelling a rich and creamy taste. Nutmeg, which is almost always used amongst other Mini Donut vendors along with many other cheap spices commonly used in an attempt to create a complex taste, are entirely avoided, as they emanate strong objectionable odors during the cooking and eating process.In their place turmeric and soy bean oil are a superior alternative. We avoid all artificial base ingredients, which means they can be taken home and re-heated in any standard oven or microwave. The leavening system we utilize also produces fluffier donuts with lower fat absorption.

Our cooking oil is superior to all others. It produces a less greasy donut as it contains no animal fats or additives. Five years ago we switched our cooking oil to reflect the needs of today. Non hydrogenated, trans fat free oil is used for all our cooking process.

It never fails… people of all ages are so deeply fascinated to witness our donut making process on site. With their nose pressed up against the plexi-glass they peer into our unit entranced as our product begins its life as a signature dough mix and water in a blender, to be mixed and transferred to the top of the dough hopper, spiral down into the oil and make its way down the SS2400’s flipper paddles, to finally end up as flawless golden brown circles of deliciousness under the heat lamp. This where they are scooped up into our durable brown bags and tossed with our premium Mekong River Cinnamon and sugar.